Lalibela is a town in the Amhara region of northern Ethiopia. It’s known for its distinctive rock-cut churches dating from the 12th and 13th centuries, which are pilgrimage sites for Coptic Christians. Carved out of rock, the subterranean monoliths include huge Bete Medhane Alem, and cross-shaped Bete Giyorgis. Many are joined by tunnels and trenches, and some have carved bas-reliefs and colored frescoes inside.

The isolated churches of Lalibela are set high in the mountain of lasta, and is world renowned for it’s rock-hewn churches sometimes considered one of the “eight wonders of the world.″ It is arguably the one place in Ethiopia that no tourist should miss! Lalibela was the capital of the zegwe Dynasty, which ruled over Ethiopia from the 10th century to the mid 13th century. Rumor has it that the Lalibela Empire was formed because the “arc of the covenant″ in Axum was lost to Lalibela. Lalibela set about gathering the world’s greatest craftsman and artisans in order to crave the churches. Even before you visit the churches, Lalibela is a strikingly singular town. The setting alone is glorious. Perched at an altitude of 2,630m, among wild craggy mountains and vast rocky escarpments, there is a stark cathedral-like grandeur to Lalibela that recalls the Drakensberg Mountains of South Africa and Lesotho. The houses of Lalibela are of a design unlike anywhere else in Ethiopia. Two-story circular stone constructs that huddle in an enormous mass over the steep slopes on which the town is built. Bet Maryam is thought to have been the first church built in Lalibela. Because of its association with the virgin, it remains the most popular church in the complex among Ethiopians. Smaller and less imposing than Medhane Alem , but also a monolith, Bet Maryam has a more intimate and elaborately carved interior, with carvings of the original Lalibela cross and of the star of David with dense paintings on parts of the roof. The Church is 13m high and its upper floor has seven rooms used to store church treasures. 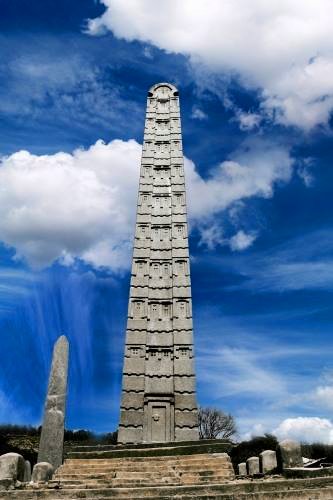 Gondar is one of the main tourist attractions on the northern historically circuit, best known for its 17th-century castles and palaces as well as the fantastically decorated church of Debra Birhan Selassie. Gonder was founded in 1635 by Emperor Fasilidas and was the imperial capital for 250 years prior to the rise of Emperor Tewodros.
The Fasil Ghebbi lies at the heart of modern Gondar and gives the city much of its character. This enclosure holds many castles with the most impressive castle being the original one. This first castle was built by Fasilidas Circa 1640. It is made of stone and shows a unique combination of Portuguese and even Indian influences.. Than in the mid 20th century it was partially restored until 1999 when the castle was more fully restored, using the original construction methods, with UNSECO funding. Construction lasted until 2002.P

Axum is recognized as the first empire of Africa and the 3rd largest Empire of the world! Myth has it that King Solomon of Israel and Queen Sheba had a son named King Menelek. King Menelek was the first king of the Empire which created a mysterious lineage between Ethiopia and Israel. Rumor has it that the “arc of the covenant″ from Mount Sinai was passed on to Ethiopia which gave the Empire ruling power and long roots to the Old Testament. Regardless of anthropological fact from fiction, the imperial capital of the Axum Empire was created at least three centuries before the birth of Christ and was the first African nation to accept Christianity.
Axum is also home to the cathedral of Tsion Maryam which was founded in the 4th century. Tsion Maryam is Ethiopia’s oldest Christian sanctuary and is still regarded as the spiritual home of Ethiopian Orthodox Christianity. Ethiopian’s first church, the original Maryam Tsion church, which consisted of 12 temples, has been destroyed probably around the 16th – century. This illustrious nation formally recognized as “Abysinnia″ was also home to the first acceptance of Islam in the 7th century, where the 4th holiest city of Muslim faith, Harar, is located.

Harar Jugol, the Fortified Historic Town (HOLY CITY)
Harar is one of the most impressive Ethiopia’s historic destinations pulls remoteness and ancient history as part of the long and colorful existence of the country, Ethiopia.
Located strictly East of Ethiopia it has survived since the late first millennium BC being a strong hold of Islam. Happen to be a strong Muslim sultanate, Harar has been ruled by seventy two successive Imams since its formation i.e. 1900s till Mid 1500s through which time quite unique, strong and authentic Muslim tradition was created. As it has a vast territory, friendly tribes namely Adare, Somali, Oromo and Argoba are the main settlers with all Muslim background.
It for long time had long trade relation with the Mediterranean and Arab world and religious interaction with the Middle East over Indian ocean and red sea which pays a great deal of contribution for its Economic and especially religious growth. Indeed the Sultanate has a lose but continuing contacts with the mid and North Christian Kingdom of the country through trade till it defuses and administration falls under the central governing Kingdom in mid 1500s. From here onwards Harar has opened the second phase in history being an ideal example of religious integrity with brotherly Christians and survived a new mix of tradition sustained to this day. Surrounding the old town, Harar today is a big capital city in the Eastern part of Ethiopia.

Bahir Dar is home to Lake Tana, the largest lake in Ethiopia. Lake Tana gives the town a tropical feel that is more like the southern valley town of Awassa than it is to northern Ethiopia. With its beautiful plant life and pretty lakeside vistas Bahir Dar is a very attractive town. It is also the base for visits to the Blue Nile falls and Lake Tana’s many monasteries.
The Blue Nile Falls Locally called Tis Abay (smoke of the Nile) or Tis lsat (water that smokes) the Blue Nile Falls is best known for the volume of water that pours from the 45m high rocks, especially during the rainy season. Above the waterfall the Nile is 400m wide while below the falls, the gorge is estimated to be 37m deep.
The Lake Tana Monasteries There are more than 20 monasteries that cover the islands and peninsulas on Lake Tana. Most were built under the rule of Anda Tsion during the 14th century. A few, notably Narga Selassie and Meteli Fasilidas are even older and date back the Gonderine period.